It’s been a little while since my last post on here so I thought it would be nice to get back to basics with another look at a piece of Charlotte Brontë’s juvenilia. “The Keep of the Bridge” is a short tale, little more than a fragment, but like other pieces of her early fiction, it offers tantalising glimpses of the celebrated author Charlotte would grow up to become.

“The Keep of the Bridge” is a single page manuscript which measures just 9cm x 5.5cm. Although not one of the Brontës’ famous tiny books, it is still minute and delicate. It is handwritten by Charlotte and features evidence of several errors which she has attempted to correct by crossing out. Paper and things to write on were a luxury to the Brontës so they could not afford to simply throw away and began a new piece. According to the first volume of Christine Alexander’s wonderful and invaluable The Early Writings of Charlotte Brontë (1987), the manuscript is in the Berg Collection of the New York Public Library. The manuscript is dated July 13th 1829 and had two accompanying pieces: pencil sketches titled “The Keep of the Bridge” (1829) and “the ruins of [?Corrantugals] Palace” (May 20th 1829). Although I can’t find it on their website or catalogues, I have no reason to believe it is anywhere else, and perhaps is considered something of a childhood novelty rather than a piece of literary history so is not publicised as much as other items in their collection which includes a great number of pieces by greats of English Literature. It’s such a shame they can’t come home to Britain where they really belong. 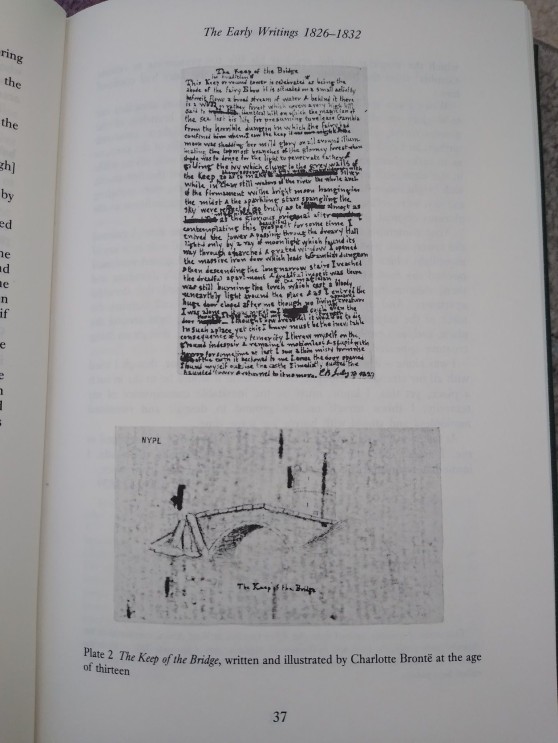 The narrative is short and seemingly sweet, however, there is a darker side to the story which emerges the tale goes on. This tale is one of Charlotte’s earliest and her future recurring characters such as the Duke of Wellington, Lord Charles Wellesley, the Marquis of Douro, and the Genii, had already made their debuts in stories prior to this. None of them feature in this story which sees an unnamed narrator describing the keep or round tower of a fairy called Ebon. The narrator notes its surroundings where “Before it flows a broad stream of water and behind it there is a large wood or rather forest, which covers a very high hill”.  The narrator also speaks of a magician of the sea who lost his life after freeing Gambia from the dungeon where a fairy had confined him. The narrator speaks of the beauty of the keep in the moonlight and its surroundings before entering the tower. They pass through and find their way to the door to Gambia’s dungeon in a particularly Gothic passage; “After contemplating this beautiful prospect for some time, I entered the tower, and passing through the dreary hall, lighted only by a ray of moonlight which found its way through an arched and grated window, I opened the massive iron door which leads to Gambia’s dungeon; and then, descending the long, narrow stairs, I reached the dreadful apartment.”

The narrator enters the dungeon room which is lit by the torch of the magician and the door slams shut behind them although there is nobody else around. Unable to open the door again, they fling themselves to the ground in despair at the prospect of dying in such a dreadful place. They are saved when a “thin, misty form” rises out of the earth and beckons to them, leading them away from the keep. The narrator states they returned no more.

Connections to Other Works

The tale is short and basic, but there are glimpses in there of things to come. Charlotte’s focus on the Gothic is evident here with the story of a creepy, haunted place and supernatural intervention as well as the focus on incarceration and absence of freedom. These most famously recur in her 1847 novel Jane Eyre with the ideas of ghosts and spirits, young Jane being locked in the red room and being basically imprisoned at school, Bertha’s chambers in Thornfield, and Jane hearing Rochester’s voice although he is many miles away. The preoccupation with the supernatural began early, and from the very beginning, Charlotte’s tales were populated with magic, fairies, and genii.

The name Gambia is possibly a nod to the River Gambia, a major river running through West Africa which the Brontës would have read about in one of their favourite periodicals, Blackwood’s Magazine. Africa was of course the principal setting for the Glass Town and Angrian stories, however, this was an Africa that was a creation of the Brontës’ hearts, minds, and pens mixed with information from periodicals and geography books and merged with elements of adventure stories, romance, and the supernatural and Gothic. They borrowed and adapted elements of fact and combined them with fiction to create their paracosmic worlds of Glass Town, Angria, and Gondal. Charlotte and her brother Branwell did use the River Gambia in their stories and it later became part of Wellingtons Land, later named Senegambia.

A lover of life, the Brontës, and Haworth who knows that I’m just going to write because I can’t help it

Quotes above are taken from Christine Alexander’s anthology.

3 thoughts on “The Keep of the Bridge by Charlotte Brontë”

Reading is my favourite occupation, when I have leisure for it and books to read' - Anne Brontë

This blog is a selection of interesting things I've come across during my history research. I have a wide interest in history ranging from Wars of the Roses, country houses, Stuarts, Georgians, Louis XIV, Napoleon and criminals. So expect to see a bit of everything on here, with a focus on little known stories.